After weeks and weeks of pointless rumours clogging up our inboxes and RSS feeds, Apple has officially launched “The new iPad” and the new Apple TV.

Let’s start with the new Apple TV then. The ATV now supports full 1080p videos, so watching your favourite movies and shows is an absolute pleasure with the full high definition.
The brand new user interface  makes the ATV even more intuitive and easy to use. The new navigation bar that runs over the top of the screen includes the Genius tab, which works really well in identifying similar movies and shows to what you have already purchased or rented.
Combining these 2 changes with iCloud integration makes the new ATV a very easy choice for a supreme media solution for our homes. The iCloud integration now supports Photo Stream, as well as allowing you to access movies and shows that you had previously downloaded to be used again on the new ATV.
This Photo Stream option is great, as it will automatically download your new photos taken with any and all of your current IOS devices, and with the new HD resolution, they look great! So how about “The new iPad”? Firstly, I put “The new iPad” in quotation marks on purpose, as this is the new name for the 3rd generation iPad. Not iPad 3, not iPad HD…The new iPad. So here’s a roundup of the new iPad.

The new iPad now officially boasts the Retina Display, hosting a massive screen resolution of 2048 x 1536. Doing the maths, that equates to 3.1 Million Pixels on the 9.7″ screen, which is without a doubt the highest resolution of any mobile device to date. This new screen, shows off more than a million extra pixels than your Full HD TV at home, and that’s impressive.
With 4x the current iPad2’s resolution, the benefits are obvious. Everything is crisper, fonts are clearer, photos are magic and games look stunning! One of the biggest let downs of the iPad2 was the really poor camera that it came with. Apple clearly listened, and so have now included the new iSight Camera into its latest iPad offering.

The iSight camera concept is what is used in the current Mac laptops and iMac ranges, and is combined with the five-element lens. This is almost identical to the camera in the iPhone 4s, which as you may know, is amazing!
Shooting video in 1080p Full HD, means that it truly has become the all-in-one device that Apple intended it to be.

With the new Retina Display, and all those extra pixels on the screen, Apple had to ensure that the CPU chip was able to keep up, and maintain the beautiful flow of graphics at the same time. To do this, they developed the strongest CPU in the mobile market to date, the A5X, with a quad-core graphics processor. This is going to allow the new iPad to do some serious processing with graphics, movies and games, just like the iPhone 4s was able to do too, but better.

So it’s official. AT&T and Verizon in the States, have yesterday unveiled that they are able to support LTE (Long Term Evolution), which if you plot on a graph with all the other wireless options today, it would fit the bill to be officially named 4G.
This does not affect us in South Africa, unfortunately, well at least not yet anyway, but the new iPad still boasts the most wireless options built into any one device at all.

What this will mean for the rest of world, until we get it, one day, is that wireless cellular connections, will be astronomically faster than the current 3G standard.
Let’s hope our providers can come to the party, and soon!

Without including the full Siri feature, Apple has included Voice Dictation. The feature’s name gives it away.
Instead of typing that email, speak it. Don’t type your next iMessage from your iPad, speak it.
The new onscreen keyboard, has a little microphone button, which will start the mic for dictation

Apple concluded in the Keynote that these were all of the new core-features in the new iPad.
But being Apple, they didn’t stop there. They also created a new software suite designed specifically for the iPad.

We all know the iLife suite for Mac, and it is great!
We also know that iMovie and GarageBand is already available for the iPad, so they received a new update.

iMovie has now been updated to support the full 1080p video that you shoot with your iPad’s camera.

GarageBand has been updated with a few extra features, including my favourite, JamSession. Connecting up to 4 different IOS devices, you can literally jam together, and record the track too. This is revolutionary!
Check out the video list for a cool demo of it.

But most importantly, the newest, and final addition to the suite is, of course, iPhoto.
I am sorry to say, that this is going to blow all of the little fly-by-night photo editors right out of the equation.
For the simple $4.99, you get a full photo storage and editing application. Here are a few of the new features from iPhoto

The simple thumbnail scroll bar allows you easily peruse through your many, many shots without going through a clumsy process doing so. Bringing up pictures side-by-side to compare the greats, or to simply hide the not-so-greats, is down with a simple swipe gesture. Double-tapping a photo will intelligently identify other photos that look very similar, and displaying them all in the main view. Comparing those 10 shots of the same flower has never been easier.

Without any fancy software, tutorials or professional help, you can now edit any portion of a photo that you would like to. Editing the colour saturation, contrast and background lighting with simple finger strokes makes this a serious winner. Automatic horizon detection and correction will straighten out those slightly crooked photos. The crop tool has never been easier to use either. 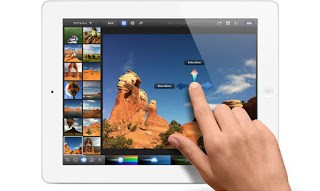 No more will you need multiple tiny apps to do different kinds of photo editing. You won’t need an app that does colour changes or pastel overtones. No need for apps that will outdate your pictures to the 70’s, or simply do some artistic blurring. iPhoto will do all of the editing that you want to do, all from within the one console. What to lighten up a certain section of the photo covered in shadows? Use the lighten brush. Removing red-eyes and blemishes cannot be simpler with the repair brush. There are 8 brushes! 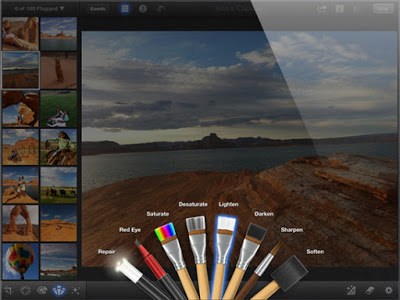 Going on holiday or a business trip? Want to use iPhoto to arrange the photos you take each day, week month or whenever into a beautiful journal-style collage? Here is your answer. Add dates, weather and maps to really bring the entire experience together.
Post the journal iCloud whenever you want to, and provide a public URL to family and friends to let them access it immediately. And that is finally that with regards to the features to the new iPad, Apple TV and iLife suite from the App Store.

How about pricing and availability?
Well as with all previous Apple launches, the States and Europe will have them first. It will officially be in their Apple Stores on the 16th of March, and will roll out in the next phase on the 23rd of March, the following week.
Being the quickest roll out that Apple has ever undertaken, let’s hope we will be in phase 3, and see it in our favourite reseller’s stores in a good few weeks.

Pricing has only been available for the States as yet, and it varies from $499 to $829, roughly R3700 to R6200, which is the same pricing model that the iPad2 used. Let’s hope it stays that low when it gets to our shores. The iPad2 has now dropped to $399 with this launch too, making it a very attractive buy, even with the new one running the show already. I don’t think we will see that extra R650 drop anytime soon, as our resellers are still listing at the original prices online, R5000 to R7200. Hmmmm…..might actually be cheaper to bring one in over the waters then?

All in all, I am very happy with the launch, and think Apple has once again set the bar way out of reach of any Android device trying to claim supremacy in the tablet market.

I can’t wait to get my grubby paws on this and the ATV, let’s hope it won’t be too long.

Here is a list of video’s for the content above. Typical Apple, all the videos are great, so take the time and check them out.

You know what to do….Enjoy!